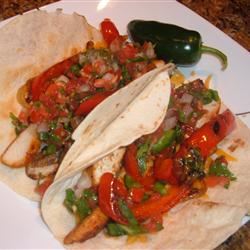 This is a colorful and flavorful fajita filling served in hot, fresh flour tortillas. Absolutely delicious! And for those who are watching their carbs, it is just as good eaten with a fork without the tortillas!

Heat a large skillet over medium-high heat. Cook the chicken breasts until the outside is golden brown, and the juices run clear. Salt the breasts to taste, then set aside.

Cook the bacon in the hot skillet until it begins to release some oil. Stir in the onion, and bell peppers; cook until the bacon is crispy and the onions are transluscent. Stir in the tomatoes and mushrooms, and continue cooking until the mushrooms have softened.

Slice the cooked chicken breasts into bite-sized pieces, then add to the skillet along with the cilantro. Stir to combine, and cook for a minute to reheat. Spoon into warmed tortillas to serve.