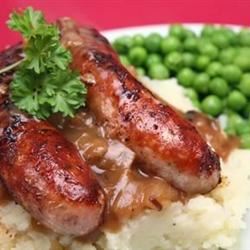 This is a delicious and irresistible recipe that everyone loves. It pairs creamy potatoes, crunchy onions, smooth gravy, and yummy sausages!!

Meanwhile, stir the bouillon cubes into the warm milk until dissolved. Stir the milk mixture and butter into the potatoes. Mash the potatoes until smooth and creamy.

Heat the cooking oil in a skillet over medium-high heat. Prick the sausages in a few places with a fork, and place them into the skillet. Cook, turning often, until golden brown and juices run clear, 12 to 15 minutes depending on thickness. Remove from the skillet and drain on paper towels.

Using the same skillet, add the onion rings. Cook and stir over medium heat until the onions are golden, but still crisp, about 5 minutes.

Heat the gravy in a pan over medium heat.

To serve, scoop the potatoes onto a large serving plate. Arrange the sausages over the potatoes, top with the onions, drizzle with gravy, and sprinkle with oregano.