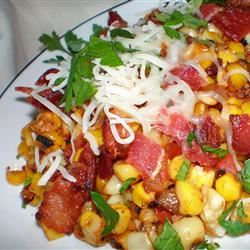 This corn dish is perfect as a side, used as a topping on a taco, mixed into a salad, with quinoa, or even served cold. I first discovered a similar dish at the Amigo Room inside The Ace Hotel in Palm Springs, CA. This was a staple of my diet in California and since I’ve moved to New York, I set out to perfect their recipe and put my own spin on it. This is my version, I hope you enjoy it!

Place the bacon in a large, deep skillet, and cook over medium-high heat, turning occasionally, until evenly browned, about 10 minutes. Drain the bacon slices on a paper towel-lined plate. When cool, chop the bacon.

Place the kernels of corn into a large skillet over high heat, and sprinkle the cumin, sea salt, and cayenne pepper over the corn. Turn the corn gently over with a spatula as it cooks, then stir in the onion, red bell pepper, and garlic. Stir the corn mixture every few minutes, until it begins to stick in the pan. Pour the beer into the pan to help unstick the corn, stir, and cook until the corn is dark with very dark spots, and the onion and red bell pepper are soft, about 20 minutes. Remove from heat, and sprinkle with chopped bacon, cotija cheese, and cilantro.