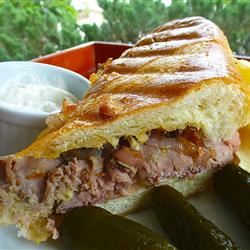 Excellent with either the Dijon-style mustard or horseradish cream.

Melt the butter in a skillet over medium heat. Stir in the sliced shallots; cook and stir until very tender and golden-brown, about 10 minutes. Season to taste with salt and black pepper. Set aside.

Preheat a panini press according to manufacturer’s instructions.

Spread the cut sides of the baguettes with Dijon mustard, then sprinkle evenly with Roquefort cheese. Divide the roast beef among the bottom pieces, then spread the shallots out over the roast beef. Top with the top pieces. Cut each baguette into two or three pieces to fit your panini machine.

Grill the sandwiches on the preheated press until the bread is golden and crisp, and the cheese has melted, about 4 minutes. While the sandwiches are cooking, beat the heavy cream to soft peaks in a metal bowl. Stir in the horseradish, and season with salt and white pepper to taste.

When ready, cut each sandwich in half, and serve with horseradish cream.