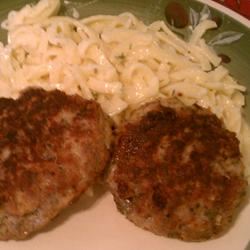 Only in the German state of Swabia is this dish called ‘Fleischkuechle.’ In Bavaria, they are called ‘Fleischpflanzerl.’ In Berlin, they say ‘Buletten,’ while throughout all of Germany they are known as ‘Frikadellen.’

Pour the milk into a bowl; soak the rolls in the milk for about 15 minutes.

Place the milk-soaked rolls, beef, pork, eggs, onion, parsley, marjoram, garlic, salt, and pepper in a large bowl; mix with your hands until evenly combined. Divide the mixture into eight portions and roll them into balls. Flatten the balls to make 1-inch thick patties.

Melt the butter in a large skillet. Fry each patty in the melted butter until meat has reached an internal temperature of 160 degrees F (72 degrees C), about 6 minutes each side. These can be served either hot or cold.