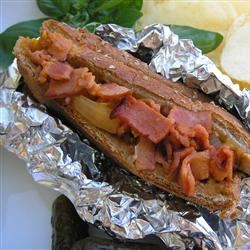 Uncle Bo was my dad’s college roommate. He created these sandwiches and served them up at Friday night parties before Penn State football games. I found this recipe some years back hidden in my mother’s recipe box and decided to make them. They’re great now for sitting in front of the big screen watching football–and football season is fast upon us. Make these for your crowd.

Place the bacon in a large, deep skillet, and cook over medium-high heat, turning occasionally, until evenly browned, about 10 minutes. Drain the bacon slices on a paper towel-lined plate. Allow the bacon to cool, and chop.

Cook and stir the onion in the bacon grease left in the skillet until onion is translucent, about 10 minutes. Stir in the bacon, chipped ham, barbecue sauce, and chili sauce until the mixture is well combined. Transfer the ham mixture to a large bowl, and stir in the pickle relish and chopped pickle.

Place about 1/4 cup of ham mixture on a bun, and top with a slice of Cheddar cheese. Close the sandwiches, wrap each in foil, and bake in the preheated oven until hot and the cheese has melted, 15 to 20 minutes. Serve hot.